A search is continuing for two missing crew members who abandoned what Home Affairs Minister Peter Dutton has called a people smuggling boat in the Daintree River area in far north Queensland.

Fisherman in the region reported seeing several people abandon the boat and flee into the rainforest near Cape Kimberley, which is a known crocodile habitat, on Sunday morning.

The ABC understands 17 people were on board the vessel — believed to be from Vietnam — and two, including the captain, are still missing.

Queensland Police Minister Mark Ryan said officers were assisting with the operational side of what was a federal matter.

Photo: Queensland Police are aiding the search for a group of people at Cape Kimberley. (ABC News: Kristy Sexton-McGrath)

Mr Dutton said the boat’s arrival was the result of a surveillance failure.

“I want to confirm for you today that Australia, we believe, has received the first vessel, the first people smuggling venture in over 1,400 days,” Mr Dutton said.

“Clearly there’s been a failing when surveillance has not worked as it should in identifying this vessel or allowing this vessel to get as close to the coast as it has,” he said.

“But it’s a reminder that the people smugglers have not gone out of business,” he said.

Police are searching cars and caravans at the Daintree River ferry to make sure no-one was stowed away.

Earlier, an ABF spokesperson said it was investigating what it believed to be an illegal fishing vessel that ran aground north of Port Douglas.

“The ABF has a contingent of officers on-site and is grateful for the support being provided by Queensland Police Service,” the spokesperson said.

“We can confirm that a number of potential unlawful non-citizens have been located.

“The ABF and Department of Home Affairs will undertake the necessary border processes to establish circumstances around the arrival.

“As investigations into this matter are ongoing it would be inappropriate to comment further.”

Mr Dutton said the suspected asylum seekers would be deported.

“The threat of people smugglers hasn’t gone away and the arrival of this boat should be a very clear and timely message that people smugglers will put people onto boats, to take money from innocent, men women and children,” he said.

“We have been very clear that we won’t allow people who arrive illegally into our country to settle in this country. People will be deported from our country at the first available opportunity.”

SES acting local area director Peter Rinaudo said his crews worked until after midnight searching for those missing in the known crocodile habitat.

“Crews will be briefed on the ground, but we will have crews searching through the mangroves today and two boat crews searching near the mouth of the Daintree River,” he said.

“It’ll be a hard slog, it’s still quite warm in there and it’ll be tough conditions for the guys.

“I hope the people, however many there are, get located — it’s not a nice area for them to be in.

“Obviously our main goal is to make sure our volunteers who have given up a day’s paid work get home safe.”

Port Douglas Marine Rescue president Ross Wood said a concerned fisherman called him about 7:00am on Sunday after seeing the boat abandoned in the Daintree.

“The boat was taking on water. Later in the day, about midday, we were called to try and stop the boat from sinking but we couldn’t get there in time,” he said.

“It had sunk by the time we got out there — it was low tide so it wasn’t fully under water, but at high tide we’d suspect it would be submerged.

“It was in a state of disrepair with a lot of diesel drums on it.”

Mr Wood said they looked around for people but had not seen any.

“My suspicion is the people had left the boat long before the morning,” he said.

“It was just near the mouth of the Daintree, so 100 metres from shore or so.

“You have to wonder how a boat like this would get so far without being detected.”

Photo: The fishing boat is partly sunk off the coast of the Daintree. (ABC News: Kristy Sexton-McGrath)

Queensland Deputy Police Commissioner Steve Gollschewski said it was too soon to know the motives of the people who were travelling on the boat.

“It’s under investigation … the true motivation of what these people are up to will become apparent as the days go by,” he said.

“We’ll wait and see what the facts are … and how it got there and the journey that it took.”

‘No risk if they don’t go in the water’

Tour operator David White has been taking people up the Daintree River for 20 years and said there was little risk to those missing, unless they unknowingly waded into crocodile habitat.

“At the mouth of the river there’s beaches on both sides and there’s rainforest and mangroves,” he said.

“There are crocodiles in the river but not hundreds of them, just one or two.

“There is no risk if they don’t go in the water.

“But if they aren’t familiar with the area, if they go in the water behind the beach where the river is or to stand on the edge of the deep water where it’s murky, there is a risk [of a crocodile attack].

“It would be very hard going if they go through the rainforest. I hope they are found safe and well.”

Italian police allegedly beat, used stun batons and sexually abused asylum seekers in an attempt to obtain their fingerprints, according to a new report released on Wednesday by Amnesty International. Amnesty collected testimonials from two dozen asylum seekers alleging they were subjected to excessive force. The human rights group says these instances of abuse could…

There might actually be an economic reason to join the anti-refugee crowd. If there’s one thing that has united Americans and Europeans in the past six months, it’s their attitudes toward refugees. In November 2015, following the Paris terrorist attacks, a Bloomberg News poll found that 53% of Americans were opposed to taking any Syrian…

A boat carrying 600 migrants has capsized off the Egyptian coast near Kafr al-Sheikh, the Egyptian military said Wednesday.

Around 150 people have been rescued and authorities have retrieved at least 29 bodies so far, the country’s state media reported.

The boat was on its way to Italy, the news agency MENA reported, attributing the information to the military.

But migrants are leaving African countries in large numbers for Europe, often in rickety boats on perilous voyages that regularly turn fatal.

On Tuesday, the Egyptian military arrested 68 people on a boat trying to make its way to Europe. They were captured off the coast of Matrouh.

Last week, the country’s navy thwarted two attempts by people trying to cross from Egypt to Europe. More than 400 would-be migrants from various nationalities were arrested in that operation.

“Why did you go to Panama?” I recently asked an asylum seeker from El Salvador.“Why south instead of north?” It is well known that El Salvador has the highest murder rate in the world. Neighbors Honduras and Guatemala do not lag far behind. People are fleeing for their lives, desperately searching for safety. During a…

via The U.S. Is Failing Central American Refugees — TIME

(HORGOS, Serbia) — A group of migrants and asylum-seekers who set off two days ago on a protest march toward Hungary reached the European Union-member state’s border on Sunday, saying they want to ask European leaders why it is closed for the thousands fleeing war and poverty. Walking slowly under a Serbian police escort, several…

via Migrants in Protest March to Ask E.U. Leaders Why the Borders Are Closed — TIME 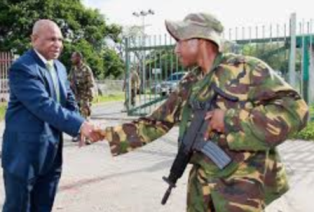 The Papua New Guinea opposition MP who launched the successful challenge to the Manus Island asylum seeker detention centre has called for the removal of the prime minister Peter O’Neill.

In 2014, the then opposition leader Belden Namah challenged the deal between Australia and PNG to open the Manus centre for offshore processing of asylum seekers who had tried to reach Australia.

Belden Namah said the ruling nearly three weeks ago showed that Mr O’Neill attempted to vandalise and compromise PNG’s constitution to serve the policy interests of a foreign government.

While the prime minister declared following the ruling that the centre would be closed, the governments of PNG and Australia have yet to settle on what to do with the asylum seekers and refugees still on Manus.

Mr Namah said he was giving the PNG and Australian governments three months to close down the facility.

Furthermore, he has called on Mr O’Neill to resign due to what he describes as mounting governance and economic crises.

The Vanimo-Green River MP was also partly responsible for another successful Supreme Court challenge against an O’Neill government initiative.

Belden Namah cited the latest ruling as further evidence that Peter O’Neill was prepared to compromise and vandalize the constitution to build his personal wealth while the country was brought to its knees.

The probe stems from investigations by the anti-corruption unit Taskforce Sweep.

An arrest warrant was secured in 2014, but fraud detectives remain stayed from arresting Mr O’Neill on that charge by a judicial review still before the courts.

Claiming PNG needs an urgent rescue, Mr Namah said he and his colleagues in opposition had done all they could to defend the constitution and hold the prime minister accountable, but that the people must take the country back.

“The whole country needs to rally behind the university students, and the PNG anti – corruption police and Task Force Sweep Team and demand the immediate resignation of the Prime Minister,” said Mr Namah.

The prime minister has repeatedly claimed his innocence over the fraud case and denied there was any evidence of wrongdoing on his part.

However Mr Namah said the Prime Minister must clear himself from allegations of corruption through the institutions of state that have worked very well for 40 years since independence.

“Papua New Guinea will be no more if this man, Peter O’Neill is allowed one more day in office” he said at a press conference in Port Moresby yesterday.

The former opposition leader said a new government or prime minister was needed as a matter of urgency to review, reform and take corrective measures to the economy and save the nation from total collapse.

“Our corruption index rating has gone over the roof, our economic and financial rating nosedived to negative value, and as an investment destination, we have withered away”.